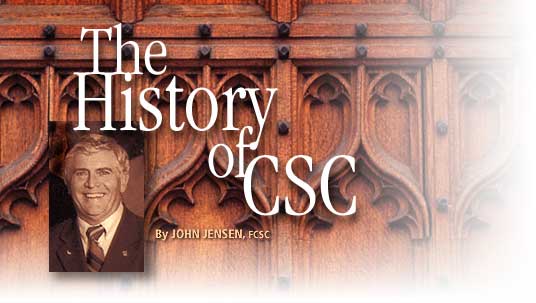 In 1951 an inspiring specification writer by the name of Denis Brough, FCSC, RSW discovered a publication Construction Specifier, which concerned itself with specification writing. Being impressed with its publisher, The Construction Specifications Institute (CSI), he joined the U.S. based association. It occurred to Denis that if there were a common interest in Toronto on the subject of specification writing , they might possibly form their own group without becoming a chapter of CSI. He explored this avenue in January 1953 by sending a letter to 20 architects and engineers to gauge interest.

An informal meeting at the old John B. Parkin office on Church Street on March 10, 1953 drew ten architects, engineers and specification writers. The idea of an association similar to CSI met with general approval. A committee consisting of Denis Brough, FCSC, RSW, Art Harper, and Max Bennet, FCSC was struck , to discuss the development of better specifications and to pursue the establishment of an association. Daily Commercial News published a brief report on the Committees first meeting held April 20, 1953. A second meeting on September 20 set the ground work for an organizing meeting November 12 at the King Edward Hotel. With 50 interested persons in attendance, the association was conceived and an organizing committee was formed. The first Board of Directors was elected on April 12, 1954 with A.W. Harper as President. The Board met during the summer to mount a membership campaign. By August there were 101 paid up members (at $10.00 per annum) showing that there was , indeed a need for an association dedicated to the improvement of specifications and drawings its members from all disciplines associated with construction.

A members meeting was held October 20, 1954 at the OAA headquarters building. The Specification Writers Association of Canada (SWAC) was born. The Associations first annual meeting was held April 27, 1955. Denis Brough, FCSC, RSW assumed the presidency for a one year term and was followed by Orton Letherland, FCSC and Stuart Frost, FCSC, RSW in 1956 and 1957 respectively.

During these years the association gathered momentum and on June 13, 1958, a Federal Charter was granted to the Specifications Writers Association of Canada. There was also growing interest throughout the country and granting of the Federal Charter was followed by the birth of long discussed Chapters in Montreal and Ottawa. The Technical Committee whose prime function was to be the scheduling , co-ordination and processing of all standard basic specifications within the Association was also formed in 1958.

Russell W. Cornell, FCSC became the Associations First Executive Director in 1957. In the early years, activities of the association were reported to members via the SWA Members Bulletin. Following the formation of SWAC a bi-monthly newsletter NIB (News In Brief) was born. The associationss magazine Specifications Associate was launched in 1959 by Mr. Cornell who was Editor-in-Chief until ending his term in office in 1967.

In February 1960 association membership passed the 500 milestone. The growth of the association continued in a steady course with its influence reaching out through sixteen chapters from the Atlantic to the Pacific by the 1970's . In 1980s, declining interest in Victoria, BC and Windsor, ON, led to the relinquishment of Chapter Charter in these two cities. Association strength rebounded with the formation of the New Brunswick Chapter in 1993, which also followed the fate of Victoria and Windsor and it relinquished its Chapter Charter in 2000.

Lloyd Boddy, FCSC served as national secretary from 1963 to 1967. In 1969, he became Executive Director of the Association and held that post for nine years. Following his retirement he was awarded a Presidentss Plaque by CSI in recognition of his contribution to the interests of all specifying professionals. Lloyd donated a portable lectern, labeled Lloyd Boddy Chapter of the Year to be awarded each year to the chapter with the highest achievements fostering the objectives of CSC.

Other awards such as Chapter Award of Merit, National Award of Merit, Presidents Award and Life Membership similarly recognize and acclaim the dedication of members to CSC.

The founders of SWAC recognized the responsibility of the architect for plans and specifications. However, they relied on people from the industry to work with the professionals in cleaning up a chaotic situation that existed with specifications. Initially members were architects, engineers and specification writers on staff or acting as their agents, while associate members were drawn from manufactures, suppliers and contractors. In spite of this mild form of discrimination, there was sincere co-operation between the professions and industry. Presidency of the Association was barred to associate members until the division between Specification member and Industrial member was eliminated. In 1974, the Association elected F. Ross Browne, FCSC as the first President from the ranks of industry.

Education has always received a strong commitment from SWAC and CSC. The Construction Specification Foundation was created in 1974 to further education and research and to promote publication and distribution of construction documents of a high standard of excellence. The trust receives and distributes funds to achieve its mandate. The original trustees were F. Ross Browne, FCSC, Darth Miller, FCSC, J.M.T. Phillips, FCSC and A.W. Cluff, FCSC.

By 1974 membership had evolved to include readers as well as writers of specifications and members felt that the original name was too restrictive. While more than half the members were specification writers from architectural and engineering offices, the remainder were fromsuppliers, contractors, associations and advertisers affected by construction documents . This led to the name change to Construction Specifications Canada (CSC) on April 1, 1975.

In 1979, the Association celebrated its Silver Jubilee by holding its annual convention in Toronto where it all began 25 years earlier. With the commemorative theme Back to the Source, the convention looked at past accomplishments and highlighted trends, innovations and topical issues affecting all segments of the Nations construction industry. Some of the accomplishments of the first 25 years included:

Introduction of Guide Studies and Specifications related to specific trades and products (This later evolved into the current TEK-AID program).

Development of standard formats for specifications and for manufacturers descriptive literature.

Introduction to Canada of a 16 division Building Construction Index (BCI). This document was subsequently blended with CSIs Index to produce the joint publication of a Uniform Construction Index (UCI) - thereby providing both the USA and Canada with standard formats for specifications, filing and cost analysis.

After six years of use, the UCI evolved into the 1978 publication of MasterFormat. The latter document is still in use following revisions in 1983, 1988 and 1995.

Contract with Federal Department of Public Works (now PWGSC) for the Association to adapt the Government Master Specification to a National Master Specification for use on both private and public projects. For a number of years, CSC contracted with PWGSC to co-ordinate the review process of the NMS sections. CSC is still a contributor to and provider of the NMS.

Introduction of a correspondence course on architectural and engineering specification writing.

Although the course was discontinued, the subject matter was condensed into a textbook The Specifier and Building Science which was published by the Association. In the mid 1970's, the Registered Specification Writer Program (RSW) was established. The program leads to the attainment of the RSW designation behind a Specifiers name to demonstrate a commitment to recognized standards of quality documentation. A similar program to identify Certified Technical Representative (CTR) for manufacturers and suppliers was introduced in 1995 and the Certified Construction Contract Administrator (CCCA) was introduced in 1998.

CSC annual conferences have always relied on financial support from industry. In 1981 the Association initiated the practice of holding a trade show in conjunction with the conference to provide an opportunity for manufacturers and suppliers to exhibit their products and services to the delegates and the design professionals in the host city. Hosting annual or biannual trade shows for many years was an important activity for many chapters. Many chapters have seen the trade show give way to CSC Connections Cafe or CSC Infonet both are vehicles that provide great opportunities for networking and promotion of both product or services.

During the 1980's, there was a resurgence of technical and educational activities. The Association developed and published the Manual of Practice (currently under revitalization) and a number of TEK-AIDS were produced by the Technical Studies Committee and trade associations. The Education and Certification Committee produced the Indicore Chapter which became the framework for education courses and the development of educational material such as The Specifiers Handbook, Home Study Courses, the Education Resource Manual, evening courses, seminars and the Five Day Workshop. Much of the development was carried out in Alberta by members of the Edmonton and Calgary Chapters.

In 1980 the magazine changed its name to Construction Canada to reflect its attention to the whole industry. While the quality of the magazine was a source of pride, it also was the source of much debate by the CSC Executive Council and the Board of Directors. Responsibility for the publishing of the magazine was contracted to NIB Publishing in 1993 to eliminate the heavy draw on the Associations financial and human resources, while still maintaining the high technical and editorial qualities that had developed over the years. Since 1998 Construction Canada has been Published by Kenilworth Publishing Inc..

As Association membership and activity grew, so did the need for corporate office space. When Russell Cornell was Executive Director of CSC, the office was located at 57 Bloor Street West, Toronto. That location was followed by offices at 1250 Bay Street and 1027 Yonge Street. CSC moved to new offices at 1 St. Clair West in 1980 and remained there until 1991 when staff relocated to 100 Lombard Street, Suite 200. In July 2001, CSC purchased an office space at 120 Carlton St. Suite 312 in Toronto and moved office locations once again.

The thrust for CSC in the 1990 was marketing. The Toronto Chapter commissioned a study in 1987 by Woods Gordon, Management Consultants. The report had provided direction for the Association to follow in marking membership, publications and educational programs. Strategic planning is a regular activity of the CSC Board of Directors, to ensure that CSC focuses its efforts and gains recognition nationwide as the leader in construction industry communication.

CSC owes much to those pioneers of over forty years ago who had a vision and with determination and devotion brought the Association into being. They nurtured it though the early years to ensure its place in history. The dedication of many members through the years have produced accomplishments for which we have a right to be proud. The future has much to offer and CSC has much to off the future. We cannot afford to be complacent. In the words of the late A. Lloyd Boddy, While not dissatisfied, let us ever be actively unsatisfied.

John Jensen, FCSC is a 32 year member of CSC, a former Vice-President and current Association Secretary/Treasurer. He was awarded CSC Life Membership Award in 1998.

The writer gratefully acknowledges the contributions of the following present and ormer members for information included in this article: